Other outstanding Next Level Goat Tyers include: 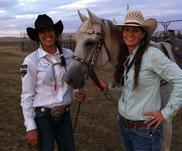 Mia Manzanares is one of the most recognizable names in goat tying today.   A NHSRA back to back champion goat tyer, Mia has also won 6 consecutive LHSRA state championships, 2 consecutive Gallup Best of the Best titles, and an IFYR championship & qualified for the CNFR twice recently being named the 2018 NIRA Southern Region Champion.   Mia has been a part of our program since 4th grade.

Kayli Meaux wrapped up her senior year with top 7 finishes at both the NHSRA finals and the IFYR.

Lauren Hansen is a 3X CNFR qualifier and the 2015 Southern Region NIRA Champion.  Lauren is also a 2X NHSRA qualifier and a LHSRA Reserve State Champion.